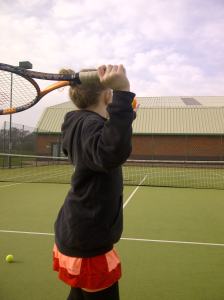 As a tennis parent, I am very lucky to have a son and a daughter. Even though in the future they will be able to play on the court, boys and girls tennis is so different, their performances should not be compared.

As I started on my tennis journey, I had not realised there was such a difference between boys and girls tennis. Indeed when my son was playing red, orange and the first part of green tennis, I wasn’t really aware of the difference. Just as there were some very good boy tennis players, there were also some excellent girl tennis players. It just seemed as though there was a smaller pool of female players. I also never really considered as to whether my son played in a different style or not from the girls that he competed against.

Last year as my daughter began to play in Red competitions and played in the occasional grade 3 competition in the summer, I began to be aware of some of the differences. There first obvious moment was when she was playing in an outdoor red grade 3 competition using the felt balls. There were only 3 girls in the competition alongside 12 boys. The organiser had organised the competition into four groups and placed the girls in different groups. My daughter and the other girl didn’t win a match in the group stage but due to unequal group sizes one girl was placed in the 9-12 play off and the other 13-15 play off and again they didn’t win a match. Even at this age, the boys were whacking the ball as hard as they could especially on their serves. Whilst they girls were trying to manoeuvre the ball around the court. The boys seemed to either hit winners or hit it out with the girls barely getting into the rally.

Into Orange ball, the gap in terms of power and aggression seems to have widened with many of the girls playing a different game. For this reason, I often look for only girls only tournament and even at 8 my daughter says that she prefers them.

However in my eyes the biggest different is not the power with which the ball is struck instead it is the way boys and girls manage their emotions. At a recent orange tournament there were two eight player draws, one for boys and girls. When the boys were playing, there were constant shouts of anguish as points were won and lost. Once the boys moved from the groups to the compass draw, for seemingly every match there were tears and heartache from the losers. Yet the girls competition was played in almost eerie silence with the only sounds that of the scores and the whack of racket on ball or thud of ball against the court. I did not see one tear shed by any of the girls; from the girl who lost a hard fought final to the girl who lost all her matches.

This led me to question why are the emotions much more publically shown by the boys and how have the girls already managed such self control? Is the level of emotions demonstrated linked to the aggression of the boys play?

One thing I am relieved about is that I have younger daughter, as it would much harder to cope with the tempers of a younger boy after dealing with the relative calmness of an older girl.